Meet our dedicated team members. We work hard to look after your physical therapy needs and help you reach your fitness goals. If you have any questions about how we can help you, don’t hesitate to contact us. 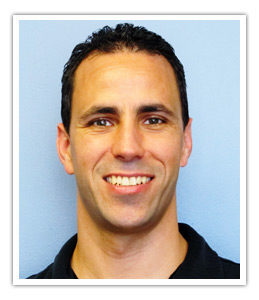 Physiotherapy is Richard’s second career. Richard initially studied biology in his honours science degree from the University of Waterloo and then went on to obtain his masters in science in environmental toxicology, also at Waterloo. Richard conducted research and worked in consulting for 3 years before being attracted to physiotherapy. His love of sports and how the body moves and functions drew him to physiotherapy. He loves being a physiotherapist and has never looked back.

Richard is an experienced registered physiotherapist who has been working with active and athletic people for 12 years. Richard graduated from the physiotherapy program at McMaster University in 2000. He combines his thorough, insightful nature with his broad treatment skills to achieve excellent results for people recovering from injury and for those trying to improve in their sport.

In addition to his clinical experience, Richard draws upon his own athletic and sports injury experiences to help people achieve their goals. From humble beginnings, Richard has achieved success in running, cycling and swimming events from a local level all the way up to the world stage. Richard’s pinnacle achievements were competing at the Hawaii Ironman after qualifying at Ironman Canada where he placed 66th out of over 2000 athletes. Richard’s ability to suffer during training and racing helped him achieve his goals, a trait that he has mastered from being a lifelong Toronto Maple Leafs fan.

Richard strongly believes physical activity for both adults and children is vitally important for physical and mental health. As a father of 3, he and his wife promote their children to be active and try to lead by example. Richard enjoys helping children recover from injury and get back to their sports and recreation.

Our Intern Program
Within the clinic we apprentice kinesiology students from the University of Waterloo and students in the physiotherapy program at McMaster University. Our students are thoroughly trained and closely monitored by the physiotherapists. Having students provides our patients with several benefits. Firstly, as a team we can provide extremely thorough treatments. Also, our students help keep the physical therapists up to date with the latest research as well as keeping them on their toes with insightful questions.